Israeli Prime Minister Benjamin Netanyahu took to Twitter on Saturday to hail new US President Donald Trump’s decision to build a wall on the border with Mexico.

On Wednesday, Trump signed an executive order telling officials to begin to “plan, design and construct a physical wall” along the 3,200km US-Mexico border, making good on a campaign pledge.

In an interview with American channel Fox News on Thursday Trump justified his decision, citing Israel, which, he said, had managed to “stop 99.9 percent” of illegal immigration by constructing a wall.

He was referring to the more than 240km barrier Israel completed in 2014 along its border with Egypt, a route previously taken by many African illegal immigrants and traffickers. 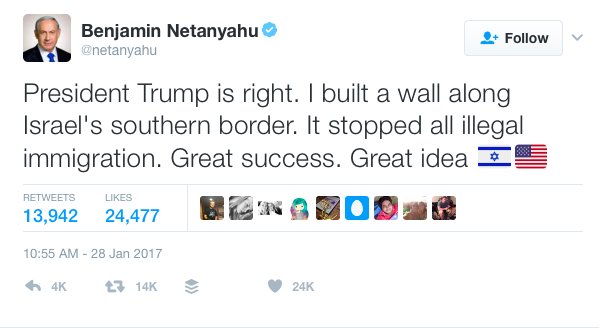 Netanyahu, who heads one of the most right-wing governments in the history of the Jewish state, has not hidden his admiration for the new US president.

The Israeli premier’s most nationalist allies see in Trump’s administration the chance to continue building Jewish settlements in occupied east Jerusalem and the West Bank.

Israel announced a major settlement expansion in the days after Trump’s 20 January inauguration.

The announcements have deeply concerned those seeking to salvage a two-state solution to the Israeli-Palestinian conflict.